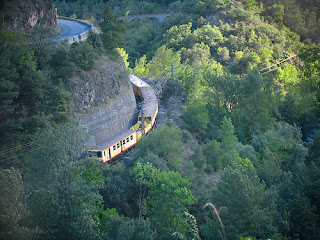 Looking for something to do in Perpignan?
Following on from the very successful "Bus à 1 euro" which was launched last year in Perpignan, we are now going to have "le train à 1 euro" from Saturday 17 December.

From Perpignan to Villefranche de Conflent ( 50kms west of Perpignan), a train ticket will cost only 1euro.
Villefranche de Conflent is a beautiful village to visit, fortified by Vauban in the 17th century. It is a fortified town, the high walls of the fortress wrapping their arms around the picturesque village with it's quaint cafés, restaurants, gift shops and village houses. Ranked as one of ' les plus beaux villages en france", it's like taking a step back in time with it's cobbled stoned streets and crumbling village houses.
Lots to see and do there, including visiting the Fort of Liberia through an underground tunnel ( not for the faint hearted).There are interesting grottes ( caves )  to see nearby and a myriad of shops and restaurants in the little village itself.
You can take the famous yellow train from there and venture further up the mountains to make a real day out of it.
Practically for the all the commuters coming from here to Perpignan every day, the local government hopes to encourage people to take the train and not their car.
That's one day of the Christmas holidays ticked off for me!!
Posted by Kaz O'Reilly at 3:26 AM