Mayors in the PO - Scandal Alert! 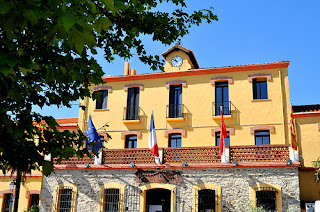 Another mayor from the PO is in the merde it seems this week, as the mayor of Saint Esteve ( a large suburb of Perpignan ) is brought before the courts. This time the charge is favouritism towards an association called Boitaclous regarding the management of the New Theatre which opened in St Esteve about 2 years ago. The prosecution is demanding one month in prison and a 5000euro fine.Judgement will be delivered on 26 Jan in the New Year.
There has been quite a few scandals in the region over the past couple of years ..
L'affaire de la Chaussette or the Scandal of the Socks!!!
During the Perpignan mayor elections for 2009, supporters of the outgoing mayor, JP Alduy, were accused and found guilty of hampering with the electoral procedure and slipping a few extra voting slips into the ballot boxes. Voting slips that they had hidden in their socks, stuffed down their pants and inside their underwear.
Having being caught red handed, the election was deemed null and void and Perpignan was effectively without a mayor until another election was called one year later. JP Alduy was duly voted in. And what did he do? Resigned a couple of weeks later! Really, you couldn't make it up!!
The mayor of St Cyprien and his fetish for art (RIP)
In 2009, Jacques Bouille, the mayor of St Cyprien killed himself in his prison cell. He had been incarcerated after being embroiled in a multi million art fraud where millions worth of art went missing or ended up in his own home. He was also accused of taking bribes and "mishandling" the town's coffers which had run up a deficit of over 40million.
Le Barcares - jail sentence for mayor
In June of this year, the mayor of Barcares received a suspended jail sentence for 18months and fined 10000euros. Her crime was "favouritism", notably to her brother. Her husband is no stranger to controversy too and there have been drug rumours hanging about him for some time.
Banyuls sur Mer - a taste for the high life
Accused of misappropriating funds and inventing expenses, this mayor has actually taken a couple of bloggers to court ( and lost) for daring to speak out about him...

Is it the case , that these mayors believed themselves to be above the law and free to do what they liked? Spending public money willy nilly and turning favours for their cohorts with deep pockets? Sounds like Ireland in the boom years!
At least they are being brought to justice in these more transparent times.
Posted by Kaz O'Reilly at 2:00 AM