The calm after the storm

Credit where credit is due, the authorites have done a brilliant job over the past few weeks and thankfully were no fatalities during 'le deluge'.

There was one noteworthy incident though , on Monday morning, a truck driver was tootling along , minding his own business when a bullet came whizzing through his windscreen, just grazing past his shoulder. Terrified, he ducked under his seat as another bullet shot by. The driver, with several face wounds and blood streaming down his face, struggled to get out of his truck and ran, petrified for his life.
The assailant, a man in his late 60s, totally destraught because his house was flooded and because 'les pompiers' were taking so long to respond to his calls, grabbed his caliber 22LR and stalked out his front door seeking vengeance.
He is still being held in custody

And spare a thought for this poor guy, in Moulin a Vent, who woke up to find his car 'un peu abimé'. Oops! 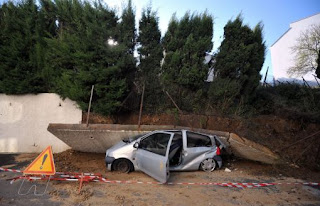