Congrads to the boys 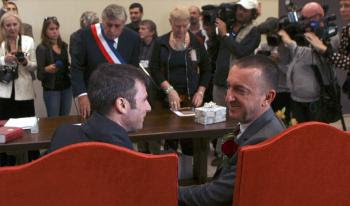 Our little town of Cabestany doesn't normally make headline news across France , but this weekend Cabestany was under the spotlight as Patrick et Guillaume were 'symbolically' married by our communist mayor, Jean Vila.
The news made headlines in all the national papers, Le Monde, Le Figaro, La Tribune, L'Equipe etc and or course our own local paper, L'Independent and all the National TV channels
The marriage has sparked debate and the whole village of Cabestany is talking about it ...
The only other gay marriage in France was celebrated in 2004 in Gironde and was annuled thereafter as it was deemed illegal. Our controversial mayor did not officially record the happy event so that it cannot be annuled at a later date. The marriage is therefore only a symbolic one.
Feliciations quand même les garçons!
Posted by Kaz O'Reilly at 2:01 AM