Is flirting,either face to face or using a social network like facebook or sending SMS's by your mobile, being unfaithful? Eva Longoria seems to think so and is divorcing her French husband of 7 years , basketball player Tony Parker, for flirting by SMS with a girl that he had never had any relations with.

In France , where flirting is a national past-time and it's considered rude not to flirt, this is sending shockwaves throughout the country. Flirting is as natural to French men and women as breathing and is, most of the time, tongue in cheek, harmless complimentary chit chat that adds a little skip to your step. Now, I don't know how saucy or x-rated Tony Parkers text messages were, causing Eva to pull the plug, but I'd wager there are quite a few french men deleting messages on their phones and facebook accounts as I type!

In the small village where I live, my baker calls me " la grande belle", my Catalan butcher ( female) calls me " la bella nena" my students in English class ( all over 70) have all proposed to me and flirt outrageously with me non stop.
Nearly every transaction involves a bit of flirtatious french flattery and indeed flirting properly is a skill in France which should be perfected if you expect to get good service / the best table in a restaurant or a discount on a purchase. Flirting in France does not mean you want to jump into her/his knickers, flirting is just fun, lightening up your day.
My fair blue eyed sister is a master of flirting ( she takes after our Mother!) and I can only stand back in admiration as she has the French male eating out of her proferred hand!
Recently, we were organising a tour for a group of 20 people. On telephoning the bus company ,we were told that the bus we had booked weeks in advance was unavailable. Full stop. No amount of wheedling would sway them. "That's it", my sister Suz announced, "this calls for action." She changed from jeans and tee shirt into a smart skirt, killer heels and sprayed herself with some coco chanel. Half an hour later, she returned from the bus depot, triumphant : José, our bus man, not only had found a bus, but, had given it to Suz for half price AND he wanted to come on the tour!!! He regularly emails her now with flirtatious emails.
A bit of harmless and healthy fun? Perhaps. But Eva aint buying it!
Posted by Kaz O'Reilly at 1:58 PM No comments: 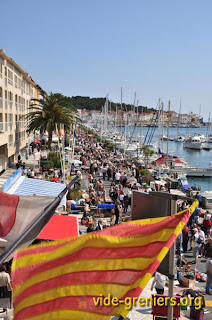 .. Is another man's treasure

The vide grenier ( empty your attic ) epitomises this old saying here in France where every town holds his own 'car boot sale' at least once or twice a year. This weekend, one of the local vide greniers was on in Port Vendres, where my sister lives , so we headed off bright and early on Sunday morning to snag a few bargains.

The whole quay in Port Vendres was jammed with stalls selling everything from antiques, to clothes, old teddy bears, games, jewellery and everything else under the sun as people jostled for bargains and children ran around giddy, testing out prams, bikes and used toys.
The atmosphere was fabulous, a real family day out, with stallholders sharing their impromptu pique-niques (avec du vin of course), punters negotiating good naturedly and everyone enjoying picking up a good bargain. All this against the back drop of the yachts bobbing in the quay, the piercing blue sky and the quaint shop fronts of Port Vendres.
I managed to snaffle a pair of brand new ski boots for my daughter for 50cents, a funky unused retro handbag for a euro and some English books going for a song.
Now, that's what I call retail therapy!!!

Check out http://www.vide-greniers.org/ for a full list of vide greniers
Posted by Kaz O'Reilly at 1:33 PM 1 comment:

Cursing in France is quite accepted in all levels of society. I'm no prude , yet it always makes me squirm when I am doing some business at the bank/insurance company/supermarket/pharmacy/school and the person dealing with me cries out "Merde" or "Putain de merde", usually over something very trivial.
Parents are very lax about their children cursing and it appears to be fine to punctuate every sentence with a french obscenity.
In Ireland, it is not kosher to curse when you are in an environment with kids or older people or in a professional situation and certainly, the teacher in school does not let out a stream of offensives in front of her 4 year olds!!
My 3 year olds first curse word was in French .. when trying to take off her safety belt , she exclaimed 'putain de merde" ( direct translation - shitty whore!). In one way, I was delighted that she hadn't picked up any curse words from me, in English, but on the other, where had she learnt that disgusting phrase?
There is a popular radio station here in France that is called FG Music and every 5 minutes or so , they announce that they are playing F%CKING GOOD music after the F%CKING GOOD news and the F%CKING GOOD weather forecast.
WTF???
Good to know in France ( in case anyone ever calls you same!!)
Swear words:
Putain : Whore ( can be shortened to pute)
Putain de merde : Bad Whore
Merde : Shit
Con :  C U oN Tuesday ( short for conasse) - Sarko famously was caught saying "casse toi, pauve con!" whilst being jostled around by the public in the lead up to the last gen election
Va te faire foutre : Go F%ck yourself ( often heard in service industries!!!)
Salope : slut
pétasse : bimbo
Foutre : to f%ck , 'Je m'en fou', I don't give a f..

... The things you don't learn at the Alliance Francaise!!
Posted by Kaz O'Reilly at 7:47 AM 3 comments: