We had the unexpected pleasure of being invited along to the *drum roll* red carpetted VIP lounge for USAP's match last weekend.
(USAP for the uninitiated, is Perpignan's local rugby team and rugby is the Number One Sport here in the Deep South of France)
We rubbed shoulders with Perpignan's hob nobs and beautiful people, enjoyed a four course delicious meal and cheered USAP to victory from the best seats in the house. Apart from the fact that it was actually SNOWING while the match was taking place and that I had to forgo fashion pride and wear my full ski gear, including two pairs of ski gloves, it was a five star way to enjoy a rugby match.
At our table of 12, there were three bottles of excellent wine. With the dessert, we were served a toasty Rivesaltes Ambré. We left the table 2 hours later leaving most of this (free) wine behind us....
At the FREE bar at half time and full time, most people weren't even interested in going to the bar... a few people had a glass of champagne, others an orangina!!!  and there was certainly no rush on the barmen.
Now, close your eyes and imagine the scene in Ireland. Free wine with the meal and a free bar for the whole match. We're talking scrums and tackles and strategic planning, just to get to the bar! We're talking singing and dancing and uproarious behaviour, back slapping, pint gulping, high fiving, bear hugging, the fields of Athenry, then more pints, more chasers, pee-ing everywhere in the stadium and general tom foolery. We're talking girls in micro mini skirts, tank tops and killer stillettos. We're talking mayhem, folks.
The Mediterranean drinking culture sure is different .. even though Monsieur le Mediterranean actually drinks more than your typical Irishman, there is no binge drinking culture and one rarely sees a drunk French person.
Slow and steady wins the race, it appears "Regular and moderate alcohol intake throughout the week, the typical pattern in middle aged men in France is associated with a low risk of  heart disease, whereas the binge drinking pattern more prevalent in Ireland and the the UK confers a higher risk," Jean-Bernard Ruidavets, MD, of Toulouse University in France says.
Be careful out there! Chin chin agus Sláinte!!
ALLEZ USAP!
Posted by Kaz O'Reilly at 1:46 AM 2 comments:

A writers retreat in the South of France 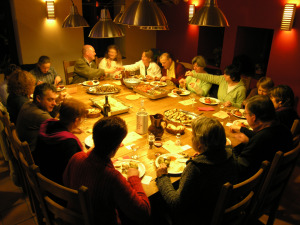 Join author Rosemary Bailey for a writing retreat this Autumn in the small mountain village of Planès in the Cerdagne, the most cloudless region of France... From the 16th to the 21st September , escape above the clouds to the The l’Orri eco-lodge , offering time and space to write, think and dream. 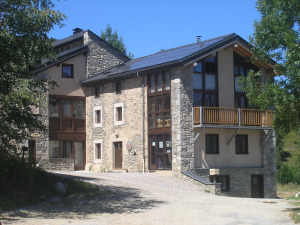 Optional yoga classes with Avery Sumner and meditative walks can further help focus the mind.
All are welcome, whatever you write, from personal memoir to fiction, travellers’ tales to biography. Whatever form you choose, articles, blogs, print or e-books, can benefit from a focused retreat with other writers.


Avery Sumner grew up on a self-sufficient homestead in the southern United States where she cultivated a love for barefoot living. As a child she spent many solitary hours in the stillness of nature and credits these early experiences for directing her to the life she currently leads as a Yoga Alliance certified yoga teacher and writer. Avery presently lives in the hills of the southernmost region of France where the Pyrenees meet the Mediterranean.The course runs from Monday evening to Saturday morning. There will be optional yoga sessions in the mornings and evenings, and a morning writing workshop with Rosemary Bailey.
Price
Single room 600 euros
Dormitory accommodation 450 euros
To contact Rosemary Bailey please use the following email address:
francewritingretreat@gmail.com
Or you may contact L’Orri de Planès by phone or email.
email: contact@orrideplanes.com
telephone:  33 (0)4 68 04 29 47
More details here : http://francewritingretreat.com

La Carnaval and The Burning Man

La Carnaval here in the Deep South is celebrated in every town and village throughout the months of February and March. We have toodled along to the parades every year, watching the spectacle and the kids going wild having confetti battles. The sun was shining and the tramontane had died down this weekend , just in time for the parade through the streets of our village, Cabestany.
This is the first time they have had the parade in Cabestany and it seemed like the whole village was there. As we traipsed after the géants, we wondered, what the hell is La Carnaval about anyway? I asked some French friends and they didn't really know either "c'est la carnaval, quoi!"
So, what is the history of La Carnaval?
The word carnivale comes from two latin words : carne meaning flesh and vale meaning farewell ( merci wikipedia!). In the Catholic religion, it used to the the big blow out before lent began, your last chance to eat meat ( carnivore) and indulge in all kinds of naughty behaviour before you knuckled down and gave up joy for 40 long days and 40 long nights. Mardi Gras was what we call Pancake Tuesday, or Fat Tuesday when all the fatty stuff in the house was eaten up..
Now, here in France, there seems to be no specific date here for La Carnaval, and every town and village has their own parade on a different weekend during February and March. The kids get dressed up, there is much singing and dancing and parading about.
They also have their very own burning man ... in a solemn ceremony , at the end of the parade, the effigy called Monsieur Carnaval is burnt to a cinder - this represents burning all the excesses and sins of the carnival itself, or burning the evil spirits...
If you really want to experience a Rio Type Mardi Gras, your best bet is to head South to Spain where adults and children get really into the spirit of it, dressing up and partying hard.
Sitges, just 35kms south of Barcelona, hosts one of the biggest and wildest carnivals in the world, partying like crazy for at least a week. See here for more details...
Et voilà, c'est ça La Carnaval!

Breaking news from France on the horse scandal.
Cheval meat is being sold as....... cheval meat. What a novel idea. You read it here first folks, seen in a local supermarket, they are selling horse meat as ... horse meat. Daring!!! 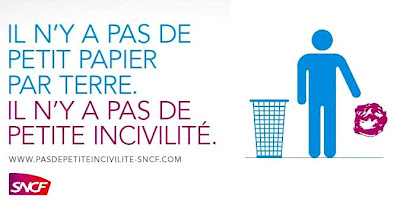 The French have a reputation as being rude, arrogant and impolite. In Paris, even more so, ranking highly in polls as unfriendly, unhelpful and downright difficult. The metro and the trains are interesting places to observe the Pushy Parisians and anyone who has lived there, will tell of the angst just merely getting from A to B on a daily basis.
The National train service provider, SNCF, has employed over 100 stewards in the trains, to ensure that the Feckless French mind their P's and Q's and behave themsevles.
Their remit is to stop passengers putting their feet up on seats, to eliminate smoking, drinking, spitting and giving the finger, among other offences, i.e., to teach them some manners.
'Les agents pour lutter contre les incivilites' have a tough job , with a recent poll of commuters indicating that 97% of those polled had suffered some 'incivility' in the past month. Their slogan is "Il n y'a pas de petite incivilité ", there is no such thing as a small impoliteness .. sounds like they have their work cut out for them!!!
Anyone from Paris notice any difference since the Politeness Police have come into force?
Posted by Kaz O'Reilly at 9:38 AM No comments: 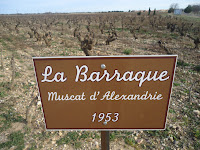 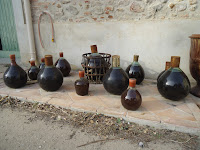 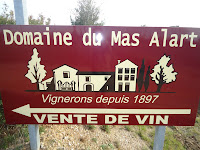