After our "nuptials" last week, Mr Getrealfrance and myself treated ourselves to lunch in Perpignan's only Michelin Star restaurant, La Galinette.
It's a lovely intimate restaurant, probably no more than 40 covers, split into two rooms by a book-casey thing. There are, as you would expect for a starred restaurant, the white linen tablecloths, the chunky expensive glassware, the shiny cutlery ( always handy for checking your lipstick!!) and plenty of discreet waiting staff waltzing around silently.
The lunch special really is excellent value ( although there is no choice) and for 19euros, this is a great opportunity to try an establishment of this caliber. 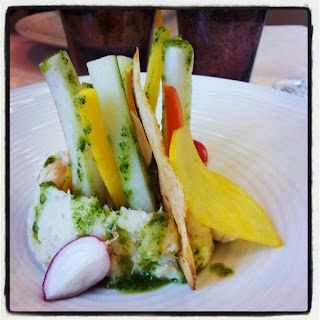 Starters was a brandade de morue ( a purée of salted cod and potatoes) with raw crudities artfully hedgehogging the purée. It was nice and light, the brandade was't too salty as can often be the case and the crispy beetroot, carrots, cucumber and radishes complimented it nicely. 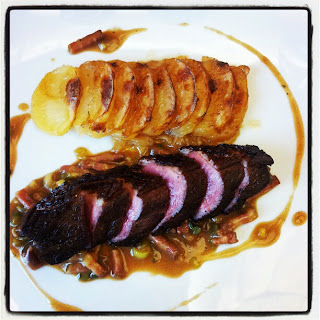 Mains was magret de canard with roast sliced potatoes. The duck had been sealed on high heat and then roasted in the oven, but not for long though, and it was quite rare which we didn't mind, but it you don't like rare ( read practically raw) duck, you should ask for it "bien cuit" and see how you get on.. 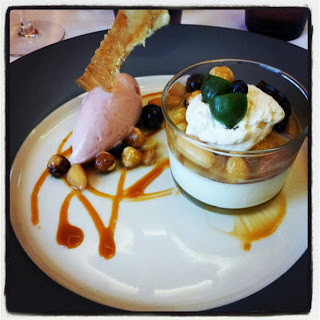 Dessert was the star of the show , a deliciously light panacotta with stewed dried fruit and nuts : doesn't sound great but it really worked ... very seasonal and very very tasty. 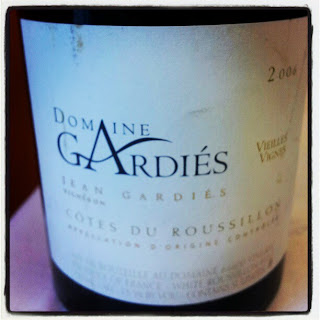 As a treat we opted for a bottle of white ; Domaine Gardiés 2006 , a mélange of grenache gris and grenache blanc, as recommended by the very knowledgeable sommelier. It was truly divine.
If I had to be picky ( it is Michelin star after all), the waitress who served our table could not answer any of our questions about the meal and had no clue or interest in what we were eating. The head waitress was obviously having her fags out the back and there was a strong whiff of cigarette smoke from her.
But all in all, an excellent restaurant, I would highly recommend for a lunch time treat.
Bonne Appetit!!!

The Church Giggles - Getting PACsed in France

9h30 was our appointment in the Courthouse in Perpignan last Friday morning to get our Pacte Civil de Solidarité or PACs as it's commonly known here in France.
The PACs status was introduced in 1999 in France, mainly to help same sex unions legimitise their partnerships ( Gay marriage is still illegal in France, see here). However, interestingly, only 6% of PACs since then have been same sex unions with two out of every three "marriages" now opting for the PACs route. Also, only 15% of PACs relationships are annulled whilst the divorce rate for traditional marriage in France is over 50%.
As we passed tattooed knuckled types shuffling around, scowling and sucking on their cigarettes on the steps of the court, any little hint of a romantic notion evaporated. When we were frisked down, my handbag emptied and made walk though an xray machine, we started having the church giggles.
"What are ye in here for?" the burly security man glared at us as if we were hardened crims, me in my best Sunday outfit 'n all
"Well, uh, we have an appointment at 09h30 to get PACsed" we giggled
Off we were sent "up to the first étage, take a left, then a second left, then another left and at the end of the corridor, sit yourselves down and someone will see to you"
Righto, we were waiting for about 30 seconds when a stern looking just PACsed French couple filed out, studiously underdressed in their ironed jeans and pristine white matching converse sneakers.
Gulp, here we go, our turn, says I to Mr Getrealfrance, let's just hope we have all the paperwork, I silently prayed to good ole St Anthony as we marched in to the office.
Anyway, the commissioner of oaths turned out to be an unusually jolly French woman and put us totally at our ease telling us she loved her" "que de bonheur" job on Fridays which was Pacsé-ing people all day.
After a few quick minutes, we were out in the lashing rain, done and dusted.
Et Voilà ; Mr and Mrs Getrealfrance!

Email ThisBlogThis!Share to TwitterShare to FacebookShare to Pinterest
Labels: Pacs in France, What you need to do to get PACsed in France
Location: Perpignan, France 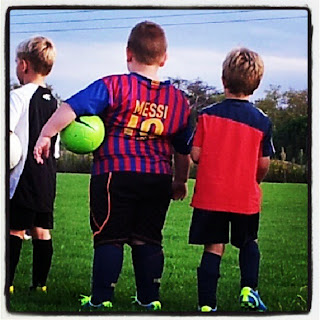 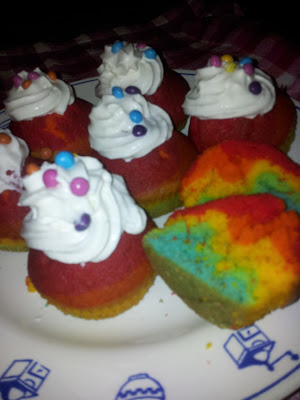 I made these cupcakes to teach Dylan's class of 5 year olds about colours and the rainbow. If the way to a man's heart is through his stomach, this must be true to the Nth degree when it comes to cupcakes and children.
They were fidgety to make, but well worth it for the reaction from les enfants and les mamans too.. I seem to have gone way up in the estimation of all the french Mummies and teachers in the school, who  , as far as I can see, rarely bake and have never seen a cupcake in the flesh, so to speak.
There could be a business in this!! 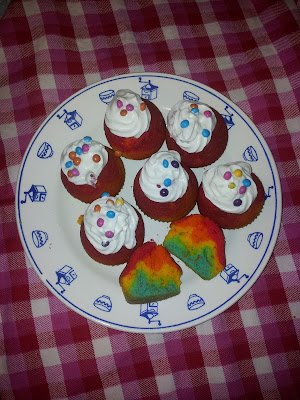 Things I Love About France - Our beach

The beaches in Autumn are more or less empty here in the Deep South of France. The weather is still warm and very pleasant ( we were all in swimming yesterday) and everyone is relaxed and chilled out now that the crowds have migrated North once again.
It always amazes me that the tourist season is not longer here, something the local tourist boards seem to overlook.

The Revolt of the Pigeons

Mr Getrealfrance was watching the news last night and came to bed with his big puzzled head on, what's a pigeon in French and why are they revolting?
This week, a massive twitter campaign has started to snowball with the hashtag #geonpi and it has caught the attention of the traditional media - but what the hell has this got to do with pigeons, I hear you ask?
Well, in France, they have this funny slang language, called verlan, where they inverse the words , ie meuf = femme, flic = keuf, fête = teuf ( have I lost you yet?) and pigeon becomes geonpi.
In French pigeon is slang for the scapegoat, the fallguy, the one who pulls the shortest straw and this is how France's entrepreneurs are feeling this week as Mr Le President rolls out his plans for budget 2013.
Why are Frances start up companies and entrepreneurs up in arms? Well, you see they feel that they are paying for the fonctionnaires ( civil servants), for the 60,000 new teachers that Hollande has promised and being punished for the capital sin of entrepreneurship ( a dirty word as far as socialists are concerned)
Why the revolt? Because the new regime plans to double the Capital Gains Tax on the risk taking, hard working pigeons from about 30% to 60%..
Finance minsiter did nothing to assuage the Pigeons fears on Friday when he said  “those who earn while sleeping, it is not right that capital income is taxed at a lower rate than income from work.”
But Mr Finance Minister, these are the guys that take the risks, create jobs and promote growth in a country.
Investors and entrepreneurs will be flocking out of the country if this new regime is imposed and who would blame them? Hollande also plans to attack the new auto entrepreneur scheme which will only see small businesses go straight back on to the Black Market, the only way that they can survive.
France will be left with a nation of under achievers, institutionalised social welfare recipients and fonctionnaires.
God Save La France...and God Speed the Pigeons
Posted by Kaz O'Reilly at 1:56 AM 5 comments:

Email ThisBlogThis!Share to TwitterShare to FacebookShare to Pinterest
Labels: geonpi, pigeons in france, the revolt of the pigeons

Snow on the Canigou

Our annual pilgrimage to the Canigou was cut short this year as there was quite a heavy fall of snow the night before. We made it about half way up from 'base camp' ( Refuge des Cortalets) before turning around due to about a foot of snow and very bad visibility.
Sods law, the skies are blue, the sun is shining and the Canigou is winking down on us as I type. O well, there's always next year!