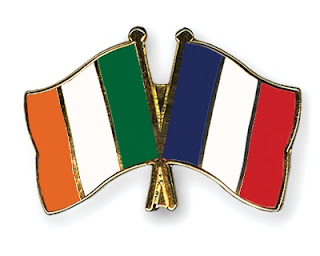 My kids have an identity crisis. They don't know whether they are French, Anglais, Irish or Catalan. The two of them were born here in France and are soon to be celebrating their 7th and 5th birthdays ( yikes, how the hell did that happen?). They are Irish (even though they were born here, they do not have French nationality as both their parents are Irish) and speak English with a heavy Irish accent and French with a Catalan one. The school calls them "les Anglais" and compounding the problem is that we mix with an ex pat crowd that are mostly from the UK, confusing them even further.
They know to shout for Ireland when we are playing France in rugby, but I've caught them more than once saying "je suis Anglais" to French people. They have never been to a Paddys Day parade, they have never seen hurling or Gaelic football, they don't know any Irish songs or dancing and horror of horrors, they don't even go to a Catholic school.
They realise they are somehow different to their English ex pat friends but couldn't understand why they were not allowed have the union jack painted on their faces for the Royal wedding last year ( My Grandmother would certainly have turned in her grave)
We go back to the Ole Sod as often as we can and the Mammy does send over books about Irish legends and the like, but really it isn't enough to make them into little cailíni agus buachailli..

My Great Grandfather was one of the leading forces in the Gaelic league, an association set up in éire to promote the Irish language in the late 19th century. A múinteoir taistil ( travelling teacher) , he went from school to school re-introducing Irish to the youth of Ireland at the time. It really hit me this Paddys Day as I tried to speak a  cúpla focail  (a few words in Irish) that my Irish needs a lot of work! The shame!
So, I'm thinking about setting up an Irish Club - one where we can meet and do Irish dancing and singing, cook up some Irish food, cheer on Irish sport, watch some Irish movies and above all, have some Irish craic. I suppose what I'm saying is that I want my children to be quintessentially Irish and not French ...Ní Fraincis go háirithe! Is it too late, am I dreaming?
Posted by Kaz O'Reilly at 1:41 AM