A novel way to pay your taxes

Pee'ed off with the Inspector of taxes, a guy in the Dordogne came up with a novel way of paying his taxes. A one Mr Patrick Fénelon had been fined because he had paid several bills with one cheque and somehow the tax authorities decided to take umbrage to this, fining him with a hefty 429euros.
No amount of persuasion would budge the tax office and so, he collected the amount due .. In 1 cent and 2 cent pieces. It took him three years and with the backing of everyone in his little village of 1000 habitants who collected the shrapnel for him,  he finally deposited the 50 kgs worth of coins to the trésorerie last Thursday in Mussidan.
The trésorerie had to accept the small change, being legal tender, and according to their office , by Friday evening, it had taken a number of staff to count up to just 350euros. The delighted Mr Fenélon has to go back today, to finalise his account with the tax office and to make sure it is all there. To the nearest centime, en tout cas.
That'll teach 'em!
Love it!
Posted by Kaz O'Reilly at 6:13 AM 1 comment: 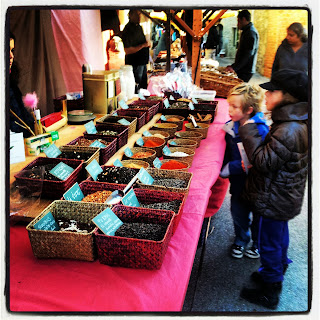 The superyacht Mirabella III cruised into Port Vendres in September and has been parked up since. This superyacht, over 40 metres long,, was originally made in Thailand and it was so big that they needed the aid of elephants to get it from the boat shed to the water.
The mast dominates the quay, dwarfing all the other yachts in Port Vendres and can be seen from every corner of the village. It even has it's own massive generator on quay Forgas to keep it in power. There are 5 luxurious suites on board and also rooms for 7 staff members and, wait for it ... it costs 90,000euros to rent this bateau folks...... per week!
So why has this stunning boat worth over 6 million euros been squatting in Port Vendres for so long?
Well, the rumours are rife, but apparently the boat rocked into the port and asked them to fill her up with petrol to which they duly obliged ; a 30,000euros petrol bill was pronounced and when the owners couldn't pay, the douanes ( customs police) were forced to the seize the yacht and there she remains. The customs police stationed on board count their lucky stars to have landed such a cushy number...
What will become of the Mirabella III?
She is finally leaving Port Vendres. Read update here ( in French )
UPDATE

Don't be mean to us!


The people vote in a socialist president who has no experience of politics or running a country. Why? Mainly because they were jealous of the current president with his bling lifestyle and supermodel wife, the guy who was trying to drag the country into the present and dealing with idiotic socialistic ideals like a 35 hour working week and the youngest retirement age on the planet.

This new president quickly starts to bring the country to it's knees. Introducing punitive taxes for small to medium businesses ( the back bone of every economy) and a tax rate for the rich at over 75%. France cannot be competitive with soaring socialist costs, yet the president surges on in denial.

The people start leaving the sinking socialist ship, particularly those who are earning good money. Actors, artists, the country's most richest man, leading the possé. The prime minister calls them "pathetic"

The country has not balanced it's books since 1974 and still behaves like a superpower with endless dosh in the bank.

An anti gay marriage protest brings nearly a million people out on the streets in the capital city on a Sunday afternoon, when you would have nothing better to do, like.

Former sex symbol makes headline news and says she wants to leave the country too ... because two poor sick elephants are going to be put down in the zoo.

A French MEP, Corrine Lepage speaks out and says "Stop being mean to us! Stop bashing the French and treating us like a laughing stock. This is a country blessed by the Gods and the poor Frenchman can no longer stand all this bashing" "Stop treating my country like the scum of the earth and a joke"

Are YOU having a larf, Corrine?
Posted by Kaz O'Reilly at 2:30 AM No comments:

Email ThisBlogThis!Share to TwitterShare to FacebookShare to Pinterest
Labels: being mean to the french, corrine lepage, french bashing

The Uber Cool Bite restaurant in Dublin has come up with the follow new 'rules' for it's restaurant re-opening  on the 15 Jan.

What are the things that annoy you about restaurants in France and what would be on your list?
Bite : Uptown Food. Downtown Vibe. Hip, not hipster.
29 South Frederick Street, Dublin
www.bitedublin.comhttpwww.bitedublin.com
Posted by Kaz O'Reilly at 11:02 AM No comments:

Christmas in France
After spending a few Christmasses in Australia and missing Ireland like crazy, we decided that we would always head back to the ole sod for the silly season. On moving to France ten years ago, we fulfilled our promise to ourselves and went “home” every year, that is, until the weather made us change our minds and stay put in the balmy South of France. Trying to criss cross Ireland to see all the friends and relatives in the severe winter weather conditions had turned into a logistical nightmare. Christmas 2010 saw us visiting my lovely aunty in Broadford, County Clare on the 23rd of December and getting stranded there for four days as we were snowed in and the house hemmed in by a veritable ice skating rink. St Stephen’s day pickings was Weetabix and Onion soup, the only food left in the house and not even a drop of vino to go with it.
So, last year, for the first time, we stayed in our own house in French suburbia and loved it. We flew the Granny in, got a massive Christmas tree, soaked up the ambiance in our little village and, most importantly, Santa knew exactly where to find us!
In France, Christmas, as you might have guessed, is all about the food. We decided this year to leave our Christmas shopping until Christmas Eve. The shops were empty. The retail shops, that is. The butchers, épiceries, patisseries, fromageries, cavistes and delicatessens were all bursting at the seams, with queues snaking out the doors onto the streets. On a stroll through Perpignan on Christmas Eve, very few people had shopping bags, most were just strolling around or doing what French people do best ; enjoying a café and looking very sophisticated.
Drink is important but definitely not drinking to get drunk. There are no 12 drunken nights before and after Christmas here. In fact, if you are thinking of getting away from it all with your partying teenagers, France would be a good option for a family Christmas holiday. It’s all about the family, the food, some good wine and champagne and with the temps hitting the late teens, some very pleasant weather for crisp mountain walks, beach days and sunny days skiing.. Of course, you miss out on the craic and the banter and the giddy tom - foolery that is Christmas in Ireland .. but, C’est la vie!
Bonne Année ‘n all that!
Posted by Kaz O'Reilly at 10:48 AM 3 comments:

Email ThisBlogThis!Share to TwitterShare to FacebookShare to Pinterest
Labels: blog about life in france, irish people in france for christmas, what to do at christmas in france
Location: Languedoc-Roussillon, France

New Years Eve in the South of France


Happy New Year! Nollaig Shona Daoibh! Bonne Année!
Thanks for tuning in to Getrealfrance in 2012. Here's to the best year ever. 2013, Bring It On!
Posted by Kaz O'Reilly at 8:11 AM No comments: