Faking it in France

Karen Bates, shares not only my name but also the 11 year itch French syndrome. She moved to France in early 2002 ( same as moi!) and just left recently. I spoke to her about her time in France and the resulting memoir/book she has self published since. 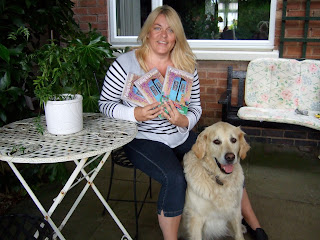 When did you move to France?
We had been looking for holiday homes  in France for a while and  having fallen in love with Normandy, and with my brother living in France decided to take the plunge and move to France in early 2002.

What did you do in France?
We were in France for almost eleven years.  Originally we hoped to make a living renting out our cottage, but when the income didn't materialise my husband and I visited the Chambre de Métiers and he registered as an Artisan, and we set up a carpentry business.

Did you fit in/ Did you feel welcome in France?
You say in your post it was a love affair with France for you and I agree, it was for us too!
We were on honeymoon for the first few years and loved everything about it!  We entered each new experience with excitement at learning something new.  We took French lessons with Greta at the local college and our French language skills improved.  We made some wonderful friends both English and French, German Finish and Dutch.  Our neighbours welcomed us and we tried very hard to fit in.

What made you decide to leave?
We decided to leave as my son after 10 years announced he didn't want to go to university in France, out of the blue one day he informed us he wanted to return to the UK.  My husband who had not wanted to move to Normandy in the first place, being too cold and rural for him, turned round and said he too didn't want to stay.  The problem was my husband who had only ever agreed to a ten year plan wanted to move to Greece!
I simply wanted to be near my family, my daughter Sarah had graduated from University and was living and working in London, my parents were getting older and living in Leicestershire, suddenly I realised it would be me my husband and the dog rattling around in a five bedroomed farmhouse.  I couldn't imagine only seeing my children and parents only a couple of times a year and I wanted to travel too. Not just backwards and forwards over the channel.

What do you miss about France?
France is a beautiful country and I will be eternally grateful to our neighbours and friends who helped us to embrace it.  The food is the main thing I miss! I have some wonderful memories but I wont miss being hard up, cold, lonely and worried that the RSI would take away our home with one of their extortionate inaccurate demands for social payments. The downsides were simply starting to out way the benefits.

What is your book about?
My book is about the dark side of living in a foreign country when the penny drops and you realise you will never fit in, no matter how hard you try. The pain of making good friends and having to say goodbye as they return to the UK, the loneliness of rural life, not being able to find work, being broke, and trying to keep sane whilst dealing with French bureaucracy. It is however a memoir of my life and so my family and England feature a great deal, it is not a book all about France. A lot of the time I am trying to escape my desolation by reminiscing about my life and what I have left behind. The book became my therapy and got me through a very tough period. 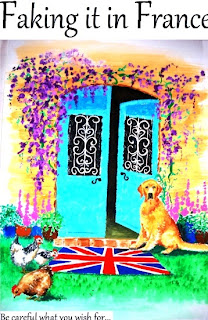 Faking it in France is the first book I have written but my second book, due out later this year, Making out in France is all about embracing France and learning to make the best of a bad situation. It is entirely based in Normandy and deals with the realities of being a foreigner and trying to fit in.  Like the first book this leads to some hilarious and comic situations and also some poignant moments too, with a surprising twist at the end.

You can buy Karen's book ( which I have yet to read) here:

Email ThisBlogThis!Share to TwitterShare to FacebookShare to Pinterest
Labels: books about living in france, faking it in france, how to survive france, karen bates france, live in france book

Latest statistics show that most couples who divorce do so after 11 years of being together. It's no longer tagged the 7 year itch but now it's the 11 year itch; time to get out of that relationship that has run it's course and just does not light that fire any longer.
So France and I are getting divorced.
11 years ago , I arrived in France with a smidgeen of French, a backpack full of dreams and a notion that I might stay for a couple of years. I fell headlong in love with the most beautiful region in France, that is the Pyrenees Orientales, and everyday I am still blown away by the beauty of the place.
We've had 11 happy years of long lazy summers, mild winters, 2 healthy and happy children, years of meeting wonderful and interesting people, entertaining visitors chez nous, enjoying everything France has to offer and literally having the Life of O'Reilly.
So why oh why I hear you say are you leaving all that behind you and heading to the sodden ole island that is Ireland. I hear the incredulity in your voices, I see the raised eyebrows and I know that you think I've lost it.  The house is sold, the packing must begin and we are on our way back to live in a country where we haven't lived in for over 16 years.
Are we MAD?
While my marriage with France is over, I think we will get on better as sometime lovers and I look forward to visiting France and getting my fill of all the things I love about this great country - this stunning region, the wines and the food, the weather , the med and the mountains and all of France's little quirky idiosyncrasies that make her the most seductive country in the world.
C´est rien qu´un au revoir, tu sais
Bientôt je reviendrai
Je reviendrai pour te revoir
Et pour te retrouver
4 months now to the big move....