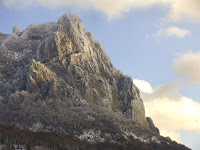 Ok, That was my anthem after my first child was born but there is quite a large group of esoterics who beleive that the world will end on 21 December 2012, ending a 5,125-year-long cycle in the ancient Maya calendar.
Many people beleive that a tiny village in Aude, the South of France, close to where I live, offers refuge from the 2012 apocalypse and are flocking to the village of less than 200 inhabitants. Apparently , many American travel agents are selling packages to Bugarach ( one way tickets, we would assume) and the locals are getting very jittery in anticipation of the influx of New Age Nutters.
According to the Sydney Morning Herald, some of the pilgrims believe that there are aliens existing in the core of the mountain near Bugarach and when the world implodes, the aliens will take their followers on the mountain with them to "safety"
The mayor has requested that the army be on standby to cope with the tide of UFOists who will certainly be flocking to the Pic de Bugarach for the 21 December, 2012.
I'm off there shortly to see if I can spot E.T. and friends and will report back. In the meantime, this whole idea ties in perfectly with my New Years Resolution which is to make 2011 a YES YEAR. Carpe Diem and all that .. especially with the aliens imminent attack!!!
Posted by Kaz O'Reilly at 1:24 PM