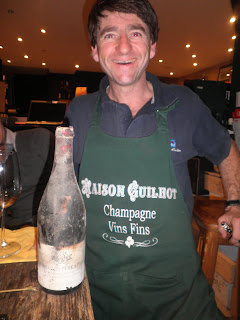 You just never know what is going to happen when you go for a "dégustation" chez Maison Guilhot and the last wine/food pairing night was no different. We tasted a delightful range from Bourgogne to Roussillon and Lucien Salani, Propriétaire Récoltant aux Balmettes, regaled us with stories and anecdotes of his life making wine. We were treated to gastronomical delights from the fabulous Bruno Léger and Georges juggled all the balls in the air with wit and contagious enthusiasm, as usual.
The surprise of the night , knocked us all for 6 and we all insisted that Georges keep it for himself but nothing would stop him sharing his bottle of 1924 Bouchard père et fils. An 87 year old bottle of wine was shared among us. It's hard to explain what drinking wine this old felt like - without wanting to sound pompous, it was a truly momentous moment. It really did feel like drinking a bit of history.
The smell of the wine was so powerful, like walking into an old french bar heavy with cigarette smoke with mouldy carpets and curtains. It tasted good, not rancid at all, almost like a strong Banyuls or tawny port. We were all transported back to 1924, imagining the hands that harvested the grapes and made the wine in a France recovering from the first world war and hopeful for the future and all the things that have happened since while this bottle has been languishing in someone's cellar.
A bottle of wine to remember on one's deathbed .. Merci encore Georges!
Posted by Kaz O'Reilly at 6:37 AM