All The Lonely People, where do they all belong?

This weekend was the Fete des Quartiers in Cabestany and a great night was had by all on Saturday. The town hall provides the aperitif, the tables and chairs and some entertainment. The neighbours all bring a plate and of course some wine and everybody has a very enjoyable night under the stars with the kids running riot on their bikes with giddy excitement rejoicing in their nocturnal freedom 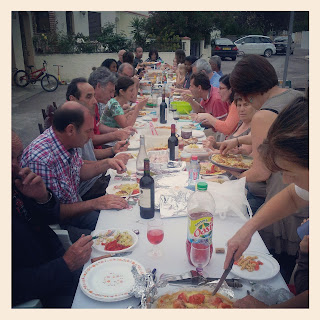 These are all our neighbours from the cul de sac ( a word which the French do not use, by the way, it's an impasse here), neighbours, some of them we haven't even clapped eyes on since last year's fête. Chatting to a daughter in law of one of the neighbours, she enthused about the soirée , saying she had been looking forward to it for months. Others expressed the same sentiments. She lives in a caserne gendarmerie in Perpignan with hundreds of other families. I asked her was it like at big family there, did they get together often with their friends?
"No, everyone keeps to themselves, we have been there for five years and we have never been invited to another persons house"
"Oh, but you are from Perpignan, you must know loads of people?" I prompted
"No, I don't really have any friends here" she said " I've one girlfriend in Prades but we only see each other about once a year.
This young lovely vibrant lady has no friends to speak of. How sad ..
Yet this is pretty indicative of where we live in Catalan country - you have your family, a few close friends (maybe)and that's it. After 11 years here , we have many acquaintances and they are all lovely people, but you are only really ever scratching the surface with them, going through the polite motions and never really getting to know them at all.
It's interesting to note that nearly all of our French friends here are not locals, but French from other parts of the country. It does seem that the further South you go in France, the cooler the people are.
In the Canicule ( heatwave) of 2003, an estimated 15,000 people died in France due to heat related stress. The "oubliés de la canicule" are they are known were 41 men and 45 women who died in the canicule and were never claimed.
From L'Express:
ls s'appelaient Alfred, Roger, Moïse ou Georgette, Eugénie, Reine. Ils étaient légionnaires, rentiers, fonctionnaires des Postes, caviste à la Coupole. Elles avaient été coiffeuses, vendeuses sur les marchés, femmes au foyer. Tous sont morts en quelques jours, dans la chaleur étouffante d'un été meurtrier. On les a surnommés les "oubliés de la canicule". Pour la seule ville de Paris, ils étaient 86 hommes et femmes qu'aucune famille, aucun proche n'a réclamés en cette fin d'été. Aujourd'hui, ils reposent pour la plupart sous les tombes anonymes de la 58e division du cimetière de Thiais (Val-de-Marne).


Will it be different in Ireland? On verra....