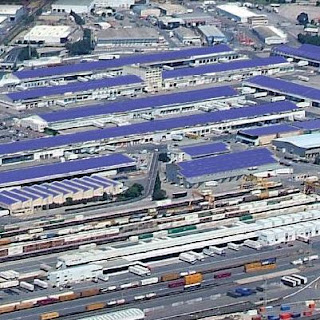 The Centre of the World

Dali claimed that Perpignan train station was the centre of the world. That, sitting there, on his way to or from his beloved homes in Figeuras and Cadeques, he would be inspired and get his best ideas. The Catalans have clung to this surreal baptism and have even called the new train station ( a monstrous modern ghost building lying idle waiting for the TGV to commence) "el centre del món". The new train station which has cost millions may end up being another white elephant .. it's just a little too far from the centre ville to make an impact. Parking and access are issues and let's just say, it's not the classiest side of town.

However, Perpignan is the centre of the universe, leading and lighting the way with the largest photovoltaic energy farm in the world!
Saint Charles is an industrial area in Peprignan, dealing with the distribution of fruit and vegetables. There's nothing special about it apart from the fact that it is now covered by 68,000m² of photovoltaic panels. The facility has a capacity of 8.8MW and is a huge step forward for the Energy business and good news for Perpignan, bringing jobs and money into an area that lacks both.
In a mere two years, the asbestos roofs that covered the 11 buildings were replaced with Photovoltaic tiles which now has the capacity to produce 10% of Perpignan's energy needs.
There are talks now to double the size of the Energy farm which is very welcome news for Perpignan and the Pyrenees Orientales.
Posted by Kaz O'Reilly at 12:41 AM