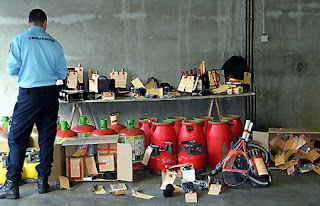 Been burgled recently? Well it might serve you well to contact the Thuir gendarmes about their cache of goods they recovered from a gang they have been surveying for the past 6 months.
They reckon the gang have committed over 50 burglaries between Perpignan and Ceret. Their booty is quite surprising, along with the usual mobile phones, televisions, wine, sat navs, there was also a large quantity of gas bottles stolen .. they must be expecting a chilly winter!
The 4 burglars, aged between 30 and 40, have been placed in custody, while the police begin their task of finding the owners of their hodge podge of treasure.
Where was their booty destined for is anyone's guess?