A Thank You Card 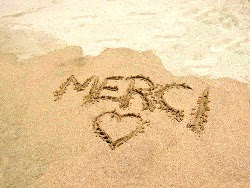 
Once upon a time there was a little 8 year old happy go lucky girl living in Ireland with her big sister and her parents. One day she woke up with the weirdest symptoms; she was dizzy, she couldn't stand up and couldn't keep any food down.
The little slip of a girleen was brought to the doctor who scratched his head and sent her to hospital for tests. There she stayed under the watchful and worried vigil of her parents as she developed some more strange symptoms ; pins and needles all over, problems with her sight, unwillingness to be touched, strange lumps. She was poked and probed and prodded and then sent to the Cork Regional Hospital, a specialist hospital for children. Still, the doctors could not pin point her illness and after nearly a month and a battery of tests covering every possible illness, the little girl was brought home by her parents as there was nothing the doctors could do for her.
Her parents watched their little girl lose weight and slump into a semi vegetable state for a few more days. One day their Aunty came to visit. She had a blessed petal from Medjugorje where the Virgin Mary was supposed to have appeared to some children. She pressed the parents to give the rose petal to the child and grasping at straws, they forced the little girl to eat the petal.
The next day, the little girl sat up in bed, looked for a peanut butter sandwich and asked if she could go back to school. It was a miracle!
The little girl was my baby sister and the Aunt was my Great Aunty Betty.

Email ThisBlogThis!Share to TwitterShare to FacebookShare to Pinterest
Labels: letter to my aunt