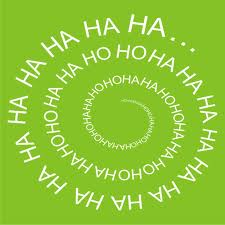 The Irish do love to laugh. They love comedy, they enjoy taking the mickey out of themselves, telling jokes and stories, letting the hair down, sharing a giggle and having a jolly good time.
The French are different to us. They do take themselves rather seriously. A café full of French people will not revertebrate with belly laughs and laughter. A group of French people at the restaurant will not be heard splitting their sides laughing and one rarely sees a gang of giggling girlfriends.
So , it was with some intrepidation that my Irish girlfriends and I headed off to Yoga Rire last night in Perpignan. The event was being hosted by Laeticia , a tall slender yoga model who started off proceedings by telling us about the history of Yoga Rire.
Apparently, Madan Kataria, an Indian dude came up with the concept in 1995 when he met a few buddies in a park in Mumbai to tell jokes. The club gained popularity and when they ran out of jokes for their laughter club, and as some of the jokes were racist or harmful to others, they just met to laugh. Now, throughout India, thousands of Laughter Yoga Clubs meet every morning in public parks.
"The goal of Laughter Yoga is to bring good health, joy and world peace through Laughter. Laughter is universal with no language and cultural barriers. Laughter Yoga Clubs are fast growing into a worldwide community of like-minded people who believe in unconditional Love, Laughter and Fellowship. Every first Sunday of May is celebrated as World Laughter Day. In the year 2000, nearly 10,000 people laughed together in Copenhagen, Denmark to set a Guinness Book Record." (source laughter yoga website)

So we started off hiding our faces and laughing behind our hands, which I thought was very clever and followed that with Yogic Breathing ( ha ha ha ho ho ho) and stomping our feet to the rhythm. There followed one of the most bizarre giddiest hours where we took our imaginary mammoth for a walk, stepped in imaginary dog poo, washed our imaginary cars and laughed our little cotton socks off.
At the end of this ( exhausting) spectacle, we were all told to lie down in a circle, heads together but not touching with our eyes closed and were invited to laugh. For 15 solid minutes, the group of strangers laughed and laughed and laughed until we had tears running down our faces and our cheeks ached. It was contagious!
After our hilarious abdominal work out, we all felt lighter, giddy and totally destressed. The French, who were all new to Yoga Rire thoroughly enjoyed it, as if they now were given permission to laugh and it was allright to let their hair down. Yes, it is ok to laugh!
I'd recommend it to all to go and have a laugh!
HAHAHA HOHOHO
Posted by Kaz O'Reilly at 5:05 AM