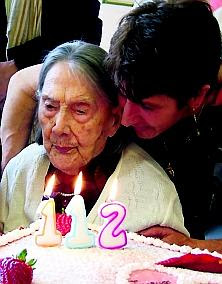 The oldest lady in the department of the Pyrenees Orientales was 112 on Friday last. Born in 1898, Marcelle Narbonne's life has straddled three centuries. Married once, she has never had any children - Her lifetime has seen 19 French presidents come and go, she was a girl of 14 when the Titanic sank and can remember a life before electricity in her house, before radio, television, fridges and all mod cons. She can still walk unaided and lives in a nursing home in Argeles sur Mer.

People are living longer these days ; In 1950, there were 200 people over the age of 100 in the world. Today there are 20,000 who have blown out 100 candles or more .. France boasts the largest proportion of centurions per head of population in Europe. The reason for this is that France has the best medical system in the world ( according to the World Health Organisation ) and the increasing number of specialised retirement homes keeping the ole dears alive..

After having two babies in the medical system here in France, I can vouch for the excellency of the service. While recuperating at the clinique, I kept referring to the hospital as the hotel, because that's what it felt like .. and a nice hotel at that! There was a bed for my partner to stay in the same room with me and help out with new babe, the restaurant would do the rounds every morning with the menus so you could choose your meals from a wide choice of tasty dishes ( rabbit in mustard sauce with gratin dauphinois for example!) and the staff and treatment were second to none.

So whereas France can be a difficult country to do business in ( more on that later ), where taxes are high and the bureaucracy, overwhelming, I do think that France, and in particular , the South of France where we live with it's mild winters and warm summers, is the best country to plan your retirement in.

Alors, here's to sipping some fab cotes de roussillon wine, nibbling on fresh baguette and local cheeses ( with our own teeth) and tripping the light fantastic on our 100th birthday!