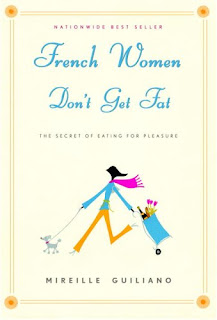 I was appalled after giving birth to my first born at the reaction of my french friends ... Without fail, the first question I was asked was, not did I have a boy or a girl, not did everything go fine, not how was the labour and how is the little darling? Mais non, it was "how many kilos have you put on" or " what are you going to do to lose the FAT?" and this while I lay in the hospital bed struggling with the joys of breastfeeding!!!

I discovered that this obsession with weight begins at a very early stage when I took my precious first born little girl for her second check up with the doc. "This child needs to go on a diet, she has put on too much weight since the last rendezvous"  I was sternly reprimanded ...She was 6 weeks old.  Luckily my Mom was around to talk sense into me and she poo pooed the doctors advice. For the record, neither I nor my child are overweight!

Learning hard lessons fast, I discovered that French people are very hung up on appearances .. one does not go out without hair and makeup perfect and immaculate clothing. Tracksuits are for running and excerising in and not for wearing on a day off. Sloppy dressing is not acceptable. You make the effort or you will be a) ridiculed or b) ignored.

The ubiquitous "pharmacie", the busiest business in every small town is crammed with all types of slimming aids and agents . "Les produits minceurs" are to the forefront of every shopfront at the moment as les francais prepare for stripping off for the summer. Whether these slimming aids work or not, is dubious, but the french do seem to be remarkably thin compared to their Irish and UK counterparts. So , how do they do it?

Many a book has been written about how french women remain as svelte as they do, yakking on about eating foods in season and never taking the stairs and such baloney , but the truth is that many of the young french I know, take slimming pills ( otherwise known as laxatives), drink coffee and smoke incessantly (to kill the hunger pangs) and paradoxically, excercise their butts off , literally.

But, are the french fattist? Would you be discriminated against if you were "fat" in France? There was uproar recently when Air France announced that obese people had to pay 75% extra for the cost of an additional seat. While the nation became embroiled in an obese discrimination debate, in Perpignan most peoples reaction was could they claim a discount if they were really skinny!?
Posted by Kaz O'Reilly at 1:16 PM