Would you vote for this man? 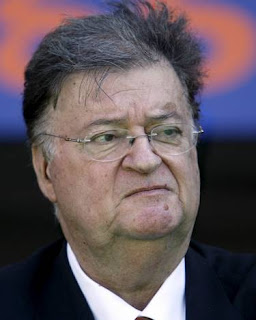 The French local elections were on over the weekend ( the french host two elections - the first one is to narrow the selection down to 2 candidates and the "deuxieme tour" then takes place a week later when everyone votes again for their preferred candidate.)

1. Earlier on this year, Georges Freche declared than Laurent Fabius (former jewish prime minister) doesn't have a very catholic face ( he was kicked out of the Socialist party for this comment)

2. Referring to the Pyrenees Orientales , George stated that "I have always been elected by a majority of "cons" ( french for fools)"

4. He once referred to two ex-"Harkis" – Algerians who fought on the French side in the colonial civil war – as lesser humans

5. He is Labelled as the Socialist "Le Pen"

6. Georges Freche thinks it is a great idea to change the name from Languedoc Roussillon to Septimanie ( sounds like a contagious disease to me ). He spent 15million euros in a drive to do just this before his campaign floundered due to outrage from the locals.

9.Georges Freche has set up "maisons de languedoc" all over the world in places like London, China and New York situated in the best addresses. The idea is that these "maisons" promote the region and the products of the Languedoc Roussillon to a greater audience. The one in New York alone, costs over 600,000 a year to run and gets less than 20 visitors daily.

10. The president has also spent 3.6million euros on a study to bring a pleasure port to Lez , in his favourite department. These waterways are in a Unesco protected zone and if tampered with , would upset the whole eco system of the Canal du Midi.

So, to summarise he is racist towards the blacks, the whites, the harkis, french born to foreigners, those who vote for him, he's ashamed of France....a great ambassador! what a ticket!

As the yanks would say, go figure!
We await to see what happens next Sunday at the deuxieme tour.....