In September 2002, Manny Edmonds came to Perpignan and played for USAP for 5 years becoming a well known figure on the rugby scene in Perpignan. He left Perpignan to play for Bayonne ( near Biarritz on the Western Coast of France) but was drawn back to Perpignan then for another year until he finally hung up his rugby boots in 2010.
Manny was born in New Zealand but considers himself to be an Aussie, moving to Canberra when he was 11 years old.
His career has been a glittering one, playing for Australia being one of the highlights, his first test match was in Canberra, his home town , against Tonga, rubbing shoulders with rugby greats such as John Eales, Jason Little and Tim Horan. He also played for 5 years with the New South Wales Waratahs ( in fact we saw him play in the SCG in Sydney a few times!) and then USAP and Bayonne.
Playing in the Top 14 semi final with USAP against Toulouse was his first exposure to the Catalan support and he was totally blown away by the intensity of it
" Over 80% of the crowd that day in Montpellier were Catalan, the stadium was a riot of red and yellow, it was amazing" he enthuses
Arriving in France, 10 years ago, Manny did not even know how to say "bonjour" and was immediately thrown into the deep end, playing with USAP which had few English speaking players at the time.
"I was lucky there were no foreigners on the team" he says " I was forced to speak French. For the first two months, I just concentrated on getting the rugby talk right. As a fly half, you have to be able to communicate with the team, so that was very important for me."
Manny says he found the French very different to the Aussies when he came here first and it took him a while to get used to their 'rigidity' - the fact that lunch has to be between 12 and 2 and dinner from 7 to 10
" If you go to a restaurant at 18h55, you will not be served until 19h00. The rules are very rigid and steadfast here and the French are generally unwilling to bend them"
We both agreed that there are pros and cons to wherever one lives and there are many things he loves about Perpignan , which he now calls home
"I love the laid back attitude , living is more important than working for the French. They are happy to live with just the basics and they appreciate what they have, good food and wine and even though they don't earn much , they don't seem to go without anything either. The medical system is excellent, the schools are good and inexpensive and the standard of life with the nice weather is pretty unbeatable"
In October 2010, Manny opened The French Coffee Shop in the centre of Perpignan. "I always wanted to open a franchise here, something like Nandos, with an Australian feel to it. I saw this franchise in Bayonne and liked the look and feel of it and so here I am"
"It's a pretty new concept for the French" he says " We get a lot of young people in here for coffees and snacks. We sell coffees, teas, cold drinks, cookies, muffins and cake and hope to branch out soon to serve sandwiches to tap into the lunch trade"
"Our most popular drink is the Chocatella, a hot chocolate made with nutella with chantilly on top and then even more nutella. The French love it , especially for their 'l'heure de gouter" pick me up in mid afternoon. There is free WIFI there and kids are welcome too." 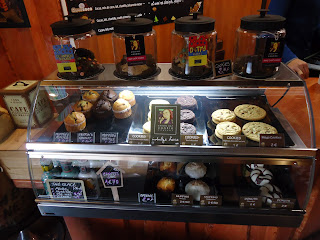 The coffee shop has a chilled laid back ambience feel to it and I can vouch that the coffee was 10/10 - it's a great addition to the traditional french cafés in Perpignan and I have no doubt it will do very well.
He is enjoying his life in France at the moment, living near a lake with his partner Gaelle, playing hand ball two or three times a week and spending time with his 4 year old daughter, Charlie.
Manny is offering a free coffee and cookie to the first person to come in and say "Get Real France"
Bonne Chance Manny!