Who is Francois Hollande?? 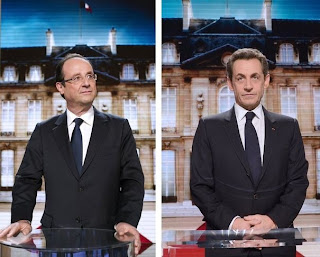 Tonight is the night of the Big Face Off between the two remaining French candidates for the presidential election  Nicolas Sarkozy and Francois Hollande
This widely watched debate is the last before the people of France go to the polls on Sunday next , 6th May. 5 years ago , it was between Sarkozy and Segolene Royale ( socialist) with Sarko making mince meat of Sego , going on to win the presidential election thereafter.
While we have come to know ( and love/hate) Sarko over the past few years, who is this Francois Hollande??
10 things you may not know about Mr Hollande

Let the Debate commence : Bring in The Clowns! There ought to be clowns...
Posted by Kaz O'Reilly at 12:56 PM