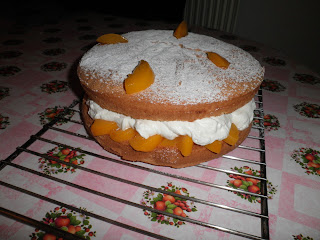 Hands up, I can't bake and after posting a "baking for idiots" appeal a few weeks ago, I received loads of recipes from readers which I am going to try one by one ...
This one came from Rachel Treloar of Domaine Treloar , the most exciting vineyard in the Roussillon .. She herself is another one of my good friends who effortlessly turns out delicious baking creations while I look on in awe ( and then help scoff!!)
I've tried and tested this one and it's the first cake I've ever made that actually worked and looked and tasted like a cake on completion! Hurray! If you follow the directions to the letter, I think you'll find this one really is foolproof:


It really is easy but when making any sponge or whipped white egg mixture make sure you have a really clean bowl and get the measurements correct.
Preheat oven to 180
4 eggs
6 oz of cornflour (mais)
1 heaped tsp Baking powder  (they come in little sachets here)
6 oz sugar
1 heaped tablespoon (1 desert spoon) of plain flour
2 tablespoons of boiling water
1 teaspoon of vanilla extract/essence

Separate eggs and beat egg whites until stiff with electric egg beater
Add boiled water at boiling point to the mixture while still beating
Add sugar gradually while still beating and keep beating until the sugar has disappeared as such or fine
Add egg yolks and vanilla essence and keep beating
Remove beater
Sift cornflour, flour and baking powder and mix bit by bit folding it with a fork into the batter until the flour mixture and the batter are all one
Pour into two cake tins which are lined with greaseproof paper – très important.
Bake at 180 for 25mins – at least until the wooden kebab skewer comes out clean.